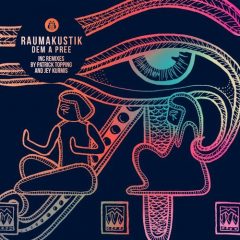 Next up on Emerald City German duo Raumakustik serve up a sonic trip for the senses via ‘Dem A Pree’ with northern talents Patrick Topping and Jey Kurmis onboard to dish out two killer remixes.

Following the huge summer anthem ‘Raider’ which dropped on Hot Creations subsidiary Hot Trax last year, Volker & Seb aka Raumakustik have been gaining an army of fans with releases following on Toolroom, Suara and Formatik. This next release, ‘Dem A Pree’ is a heavy club weapon of the highest order, prompted by dynamic and powerful vocals. “Pree means sticking your nose into someone else’s business,’ they explain. ‘Patrick Topping and Jey Kurmis did just that with our track but in this case it’s a positive thing because their perspectives on sound and vocals made it complete.”

Since his first release on Hot Trax back in 2013, Patrick Topping has since become one of the biggest names in the business with an intense touring schedule, a string of successful releases and a prized residency at Jamie’s Paradise night at DC10. Here he spins his signature style into the original with an intoxicating bassline that will shake any dance floor.

Rising star Jey Kurmis has been making a name for himself on labels such as Moon Harbour, VIVa Music and Wow! Recordings since his artist defining EP on Hot Creations last year. Stripping the original back he creates a solid, low slung roller with industrial stabs at the forefront.