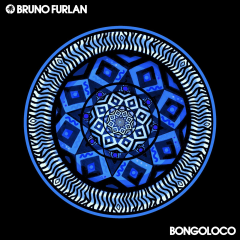 A DJ and producer whose recent studio endeavours have seen him release material on Black Book Records,  Fool’s Gold and Material, Bruno Furlan is an artist at the centre of Brazil’s recent explosion of names within the  house and tech house landscape. Based in São Paulo, the bubbling talent has built on his early experiences within  the Brazilian electronic music scene to make appearances at global events such as Dirtybird Campout and AMF  Festival. Following an impressive debut on the label with his two-track ‘The Speakers Pump Like This’, late  January brings a return to Jamie Jones’ Hot Creations imprint as he serves up two fresh dancefloor-leaning cuts  across his ‘Bongoloco’ EP.

“After the first release on Hot Creations, ideas started to boil in my head daily, and I wondered if Jamie  would play every song I started or not. When I started ‘Bongoloco’, it was a very raw groove, and I needed  something striking, a mix between a little crazy and something that made sense in the music. I thought  about adding some percussion, but nothing was good until I came across this bongo and fell in love with  the sound of it on the track. It’s impressive how achievements improve our ideas and performances, and  my Hot Creations debut was one of those. I have no doubt ‘Bongoloco’ only exists thanks to Jamie’s first  ‘Yes’” – Bruno Furlan.

Title track ‘Bongoloco’ takes cues from its name and showcases a skittering percussion-driven production built for  peak-time hours as warped drum fills and vibrant vocal calls inject an abundance of energy. Keeping things  moving, the rolling ‘Vai’ delivers a slick accompaniment to the package, serving up an anthem built for bustling  terraces worldwide.