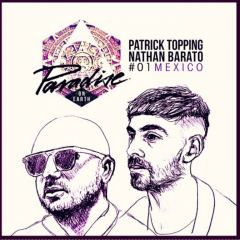 Hot Creations are launching a new ‘Paradise on Earth’ DJ Mix series with the first installment coming as a Mexico special from Paradise residents and label regulars Nathan Barato and Patrick Topping. Each mix is expertly crafted, fusing musical influences with exclusive new material alongside current favourites for your listening pleasure.

The first CD comes from Toronto-based DJ & producer Nathan Barato, an artist that has been on the rapid rise with releases on Cajual, MOOD, Relief, Saved, Circus Records, Defected and of course Hot Creations. Barato’s mix kickstarts with the sonorous opening of Derrick Carter’s ‘Where You at?’ soon venturing into big dancefloor movers like Moritz Piske ‘Dirt Cabana’ and Makam’s ‘Loletta’, cleverly contrasted with uplifting house gems such as Ian Pooley’s ‘Higgledy Piggledy’, with the disco infused ‘Dancer’ by Robert Hood bringing the mix to a sophisticated ending. Nathan explains, “This is the first compilation I’ve done, so I was nervous and excited when building the tracklist. I wasn’t inclined to make a mix that was only bombs …I wanted to express myself and show a different side of my sound.”

UK talent Patrick Topping has cemented his status as one of the most in demand names in dance music with 5 Beatport Tech-House number 1s, touring the world’s biggest festivals, from Creamfields in South America to Stereosonic in Australia, to the main stage at Movement in Detroit, whilst this year completing his third summer as resident at DC10 in Ibiza for Paradise. Here Patrick showcases the sound and style of his sets with hi-energy from the word go. “This was my first time putting together a licensed mix and it was such a fun project. Most the tracks are older but I was also luckily enough to include some of my favourite unreleased tracks of the moment. Thanks to Oli Furness, Jack N Jerk, Sean Miller & Elliot Adamson for letting me use these. There are also 3 brand new productions of mine in here.” – Patrick Topping

Since label head and visionary Jamie Jones began his Paradise night at DC10 in Ibiza five years ago, the night has gone on to be by far one of the biggest on the island, inviting the biggest names in the business to come play alongside his solid crew of talented friends and residents. The launch of the new mix series is a natural progression for the brand as the Hot Creations and Paradise empire continues to grow only stronger.

01 Derrick Carter – Where Ya At? (Mix Originale)

07 Elliot Adamson – Pleased To Meet You